Yep, this recipe is as simple as it sounds. You throw the various ingredients into one pot in different stages, and it cooks into an easy meal with plenty of leftovers for tomorrow’s lunch or dinner.

First, the ingredients. What’s not pictured here (because I forgot to take it out of the cabinet) is tomato paste and cinnamon. Also, as I said with my Maryland Crab Soup blog post, you can see I’ve used pre-minced garlic again. That’s because I bought the ingredients for the soup and for this dish at the same time. You, however, should buy fresh garlic and use that.

I’ve got salt, pepper, chipotle and ancho chili powders, vegetable oil, lean ground beef, beef broth, quinoa, diced tomatoes in sauce, an onion, and a green bell pepper. Can you use carrots in this? Yes. I just make it without them. You also don’t have to use green bell pepper, but I like the bitterness of the green pepper. 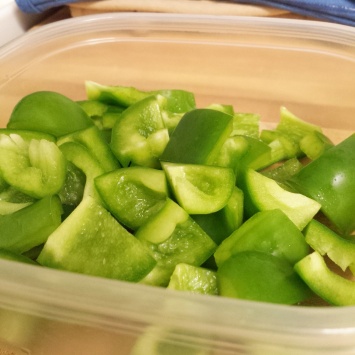 Now, for the cooking! Turn your saucepot on medium high and drizzle in some veggie oil once hot. Throw in onions and a pinch of salt. Sweat ’em for a few minutes. Add green bell pepper and cook for a minute. Then toss in your garlic.

This, by the way, is when you add your tomato paste. I forgot like a dummy, but you won’t. Once that’s done, make a hole in the middle. That’s for your meat. What do I mean? Check it:

Poor quality, I know. Throw your meat into the middle and get ready for your arm to get tired. Take the spoon or spatula or whatever utensil you’re using to chop up the meat. We’ll be mixing it in with the veggies, but I like to brown it on its own first until it’s mostly done, like this:

That’s when I add the chili powders, cinnamon, a pinch more salt, a few grinds of black pepper, and a little smoked paprika (not included in the recipe, but go for it), and mix all together. Once meat is fully browned, you’re ready for your tomatoes. Pour them in and mix them around. 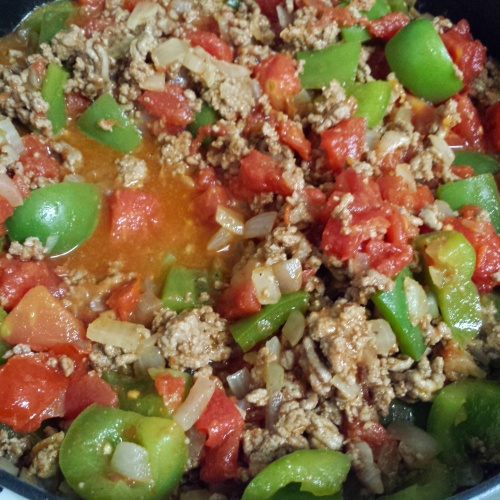 Time to add the half quart of beef stock and stir. While that heats up, you’re going to pour quinoa into a measuring up. I use half a cup. You can definitely use less. I’d advise against using more. The half cup really soaks up a lot of the liquid, I’ve found.

You’re almost done! Just keep heating up until it’s at a soft boil, then bring down to a simmer and simmer uncovered for maybe 20 minutes. I didn’t count, but you don’t really need to––eventually you’ll check your pot and it’ll be quinoa city. When cooked, the quinoa will be translucent in the middle with a little nutty-colored ring around the translucent part. You can see it in the final photo: 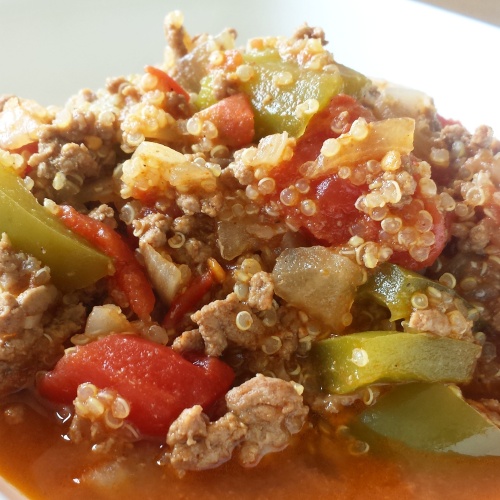 So, that’s that. When the quinoa are ready, taste for seasoning. Mine needed a little more salt. Yours might need something different. Up to you. Regardless, the great thing about this dish is that it’s got protein, veggies, and grains. It’s pretty healthy, and there will be plenty of leftovers. Happy cooking!

Heat up saucepan on medium high. Add oil, onions, and 1 teaspoon salt and saute for 2 minutes. Add green bell pepper and continue sauteing for one minute. Add garlic and cook 30 seconds. Add tomato paste and mix. Make hole in the vegetable mixture in middle of saucepan and add ground beef. Break up ground beef until mosly browned, then mix in with vegetables. Add dry spices and stir, then add tomatoes and beef broth. Bring to a light boil, then add quinoa, and reduce to a simmer. Simmer for 20 minutes, uncovered, or until quinoa is cooked.