One of my favorite things to do on the weekends is to quest for food. Driving an hour or more to try something I’m craving is, in my mind, well worth the dedication.

Now sometimes, it’s a flop. I watched “Chef” on Netflix a few weeks ago and got a craving for a cubano sandwich, and after hitting up two different places, I concluded that there are only passable cubanos in Northern Virginia. Nothing great. Of course, maybe it was arrogant of me to assume I’d be able to find an excellent cubano anywhere outside Miami, but that’s a whole different story.

I crave Korean food often, but there aren’t many options around where I live. In my bi-weekly searches for new Korean restaurants that maybe opened up nearby (all of which end in sadness), I’ve come across Kimchi House a couple of times, and this past Saturday, I figured I’d bite.

The place was wonderful, by the way. A cool looking house on the outside, a homey kitchen-esque set up on the inside. If you’re interested in going, it’s located off of Route 1 in Alexandria, very near Ft. Belvoir.

It’s not until this moment that I realized this photo is blurry, which ticks me off because it looked clear to me when I took it. I need to drop the funds for an actual camera soon. Anyway, this is kimbap (also spelled gimbap).

As is obvious, kimbap bears a resemblance to sushi. The key difference between the two seems to be that kimbap uses cooked meat instead of raw fish. Also, at least in this kimbap, there was some sort of pickled vegetable in the roll, probably a radish. 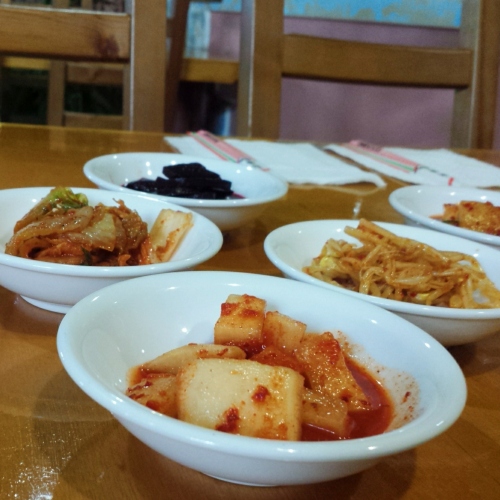 Here’s the banchan served with the dishes. In front are spicy pickled radishes. To the left is kimchi. On the right, spicy soy bean sprouts. In the back on the left, some sort of pickled beets. It was all delicious.

Then, the Yook Gae Jang, or spicy beef soup. The broth had a bite just the way I like. Also in the bowl are eggs, green onions, some sort of fungus, onions and cellophane noodles. My goodness, do I wish Kimchi House were closer.

If you’re ever in the area and you have a craving, this place’ll do it for ya.