A few Saturdays ago, I got a craving for Bun Bo Hue despite never having eaten it before. Luckily for me, Teabreak Pho & Boba is pretty close by in Sterling, Va.

Like Pho, Bun Bo Hue is a Vietnamese beef noodle soup, but the two soups have their differences.

For one, Bun Bo Hue is a spicy soup. Pho can be spicy, but it doesn’t come out of the kitchen that way. Bun Bo Hue also uses a different style of noodle: vermicelli noodles. If you’ve been to a Vietnamese restaurant, you’re likely familiar with that since vermicelli “bowls” usually comprise an entire section of the menu, just like Pho.

However, at your typical Vietnamese restaurant in Northern Virginia–where you’re likely to find Pho–you’re not likely to see Bun Bo Hue. I’m not exactly sure why it’s such a rarity, but it may have something to do with how the usual ingredients probably aren’t to the general public’s appetite around here.

Make no mistake, I ate many things in this bowl that I’ve never eaten before, including pig’s knuckles and patties of congealed pig blood. The former was fine, the latter, I wasn’t a huge fan of. Sadly, I can’t tell you what the other things in the bowl were, but they did have a light-colored patty of some sort that reminded me of a tofu but may have been some sort of rice/fish patty. Not sure.

One thing I DID put in the bowl was the restaurant’s homemade sate, which is sort of a lemongrassy flavor boost.

This place is cool too because they specialize in making a variety of Vietnamese bubble teas. Probably worth checking out if you like those! 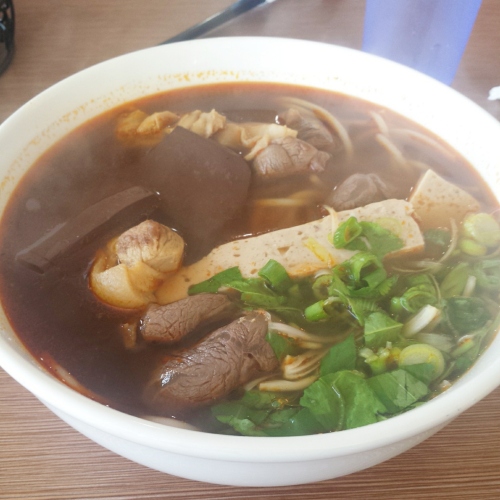