Red’s Table is perfect this time of year due to its outside seating area overlooking Reston’s Lake Thoreau. What’s better than a meal with a good view?

This time around, I got the buttermilk fried chicken, but not before ordering the clam and corn chowder: 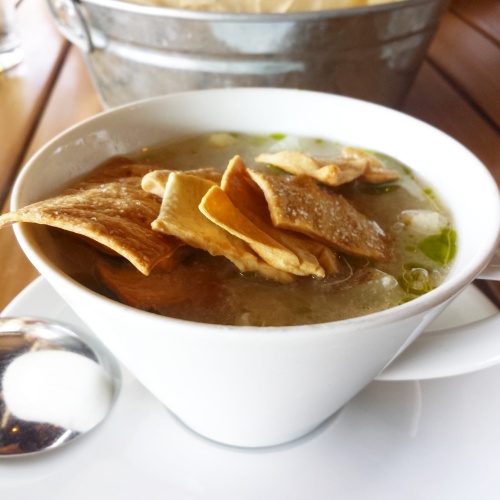 Like the other chowder I’ve had at Red’s Table, this chowder was a Rhode Island-style chowder, meaning that the broth was light and not thick and floury like a New England-style chowder. The summer corn was a great addition to the soup. Red’s Table is all about using fresh, local ingredients (many of which are picked up at the weekly Reston Farmer’s Market in the Lake Anne Plaza), so no surprise there.

The chicken was covered in garlic-miso aioli, so that added some extra flavor. The chicken pieces themselves were very bready. Maybe a little more bready than I would have preferred, but not bready enough to make this a bad dish. It isn’t. The chicken, too, is way less greasy than the fried chicken you’ll find at popular fried chicken chains, as well.

You’ll get filled up for $17 if you opt to go that route. Try going soon, as there’s no telling how long it will be on the menu.