It’s conventional wisdom that cooking some things “low and slow” yields better, tastier results. Chilis, turkeys, and tomato sauces are all better when applying low heat for many hours.

So, with a free Saturday, I decided to try my hand at making meatballs and tomato sauce, loosely based off of my Aunt Tina’s recipe that she makes every summer. As far as I’m concerned, that recipe saved my life in 2013 after I had a bit too much to drink the night before.

Let’s begin with the meatballs:

It’s also wise, I’ve been instructed, to premix your meatball ingredients. The point here is that you don’t want to overmix your meat mixture, and entropized ingredients help ensure you don’t.

That’s Italian parsley, parmesan cheese, red pepper flakes, a pinch of cayenne pepper, salt, garlic powder, and onion powder. To this, I added two raw eggs and maybe a half cup of breadcrumbs. Those keep the meatballs from falling apart.

The beef is standard ground chuck, 80/20 lean/fat ratio. I used two pounds of it and got about 30 medium-sized meatballs.

Now, plop those meatballs into a hot pan with some oil and sear ’em. I may have gone a bit longer than was needed, but nothing tasted foul. Next, remove your meatballs and set aside for later because it’s now time to build the sauce.

If you’re using a stainless steel pan (like I should have been), there’s going to be quite a bit of fond built up on the bottom of the pan. We’re going to release it from the pan and incorporate it into our tomato sauce over the next few steps. Step one, add some butter.

Step two, throw in a diced onion and one stalk of finely chopped celery. Let it go for 6-7 minutes until both are softened, but make sure you don’t burn the butter. Medium heat is the way to go, but be sure to adjust if you need to.

Time to imbue the base with some acid and umami flavor. That’s tomato paste on the left and anchovy paste on the right. I realize that the latter is a controversial ingredient for some, but it melts down. If you don’t have paste, then one or two anchovy filets work just fine.

Once you cook the pastes for a minute, it’s time to fortify the base with some red wine. I used a ~$15 Malbec. The rule of thumb is to use something you’d drink. No reason to break the bank on your cooking wine. After cooking the wine down for a few minutes, reintroduce the meatballs.

Tomatoes! Another word to the wise is to use San Marzano tomatoes imported from Italy. Most people crush them up (usually with their hands, in the spirit of the old way) before adding them to something, but I left them whole and smooshed them slightly with my mixing spoon. Doing it this way leaves little bites of tomato in the finished sauce that add a little texture. I didn’t take a photo of it, but I added some fresh chopped parsley, garlic powder, and a little bit of salt here as well.

I let the sauce simmer for about 5-6 hours, and when it was done, it looked like this:

Be sure to taste for salt.

I skimmed some of the fat that rendered from the meatballs as the sauce was simmering, but I made sure to leave some in; I wanted this sauce to be hearty, and that means having a bit of fat in there.

But wait! We’re not done. I wanted some garlic bread as well, right? But I didn’t have a clean cutting board. And after waiting for the sauce all afternoon, I wanted a quick solution. Enter, mortar and pestle.

I wanted to use the remaining parsley, too, so I threw it in, as well. Smashing garlic produces a more intense garlic flavor. There’s some scientific literature backing this idea up, but that’s up to your curious mind to locate! Also, if you’re wondering, the pinch of sea salt helps add a coarseness that makes the smashing process easier. 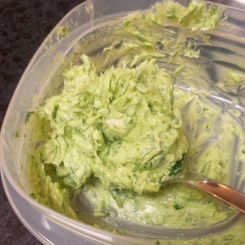 There’s the paste, the compound butter I made with it, and the bread, ready to go into the broiler for a few minutes.

I thought it was a fun twist on regular garlic bread.

The finished product. I boiled up some pappardelle noodles and ate them with the sauce.

Also, so my Italian friends don’t give me grief, I should add that this presentation is incorrect. You should separate your portion of sauce and add the noodles to it in a saucepan along with a little bit of the starchy, boiling liquid. That helps the sauce stick to your noodles better. But I didn’t do that!

I hope you try this out sometime!

2 thoughts on “Meatballs and Red Sauce”