You get a two for one with this post because I enjoyed both of these food items equally and ordered them at the same time.

Mike & Eric’s piqued my interest when I first heard about it a few weeks ago as I was doing my research. Why? It may be the only restaurant in the area that has a menu containing food items whose namesakes are related to the St. Michael’s area. Now, that’s a gimmick, sure, but St. Michael’s is a quaint town that benefits from homey little details like that.

First, the Tilghman’s Chips appetizer. Named after Tilghman Island, which was briefly occupied by the British during the War of 1812, these are best chips of this style I’ve ever had, and normally I hate this style of chips; I find the oil makes the chips extremely bitter and it leaves this nasty, oily taste in my mouth. Not so with these. I think that’s because these chips are cut thinner than other variations. It also seemed like they were more salted––a positive in my book. 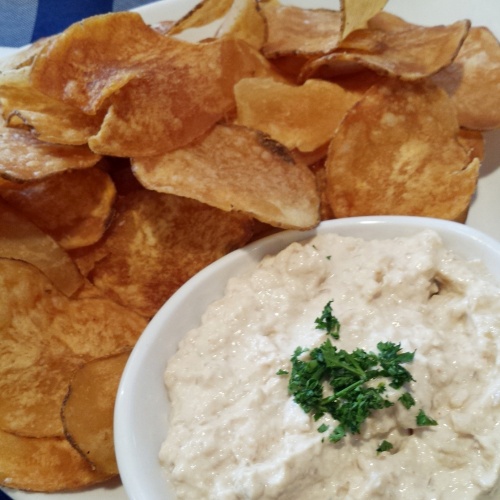 The chips were accompanied by a fresh onion horseradish dip. Take a closer look:

The dip is pretty chunky and the horseradish is up front, but doesn’t carry too much of a kick. A hearty dip, for sure. But when I wasn’t dipping the chips in the horseradish, I was plunging them into the hot crab bisque which the chef brought out to me. I had a hunch that he was either Mike or Eric, but I do not have confirmation.

That bisque was so buttery. It’s a lot like your standard lobster bisque, and I suspect the two are prepared the exact same way, except maybe without the sherry. I have also heard that traditional bisques use rice as a thickening agent, and I don’t believe rice was used in this recipe. But it was very creamy and had just the right amount of body anyway. The crab tasted fresh and was not masked by the other ingredients––just like you’d want when eating on the Eastern Shore in Maryland. I recommend it very much.

Mike & Eric’s Front Street Restaurant is located on the main street that runs through the St. Michael’s town. Parking is plentiful, so go there, park, and take a short stroll to the restaurant, then mosey around afterward.