I’m excited to share this recipe because it was born, as many good recipes are, from a glance at the pantry to see what I could make for lunch.

Now, a gastrique is traditionally caramelized sugar deglazed with vinegar and used as a flavoring for sauces, Wikipedia tells me. But Wikipedia also tells me that nowadays, the term is used for any flavored pan sauce. And that’s what this is.

More on the technique itself in a bit. First up, the pork chop, baby.

Sorry for the blurry photo. That’s a pork chop seasoned on all sides with salt, pepper, smoked paprika, and garlic powder. I’m so used to reverse-searing my steaks that I sorta opted to reverse-sear this pork chop without much thought. Someone who knows more about cooking than I can tell you if it’s better to sear beforehand, but I’ll make my case for the opposite in a bit.

Once seasoned, it’s time to slap that baby into a baking dish lined with foil and pop it into a 350 degree oven for about 10 minutes per side. After that’s done, it’s time to sear the pork chop (and thus begin the first step of the gastrique). 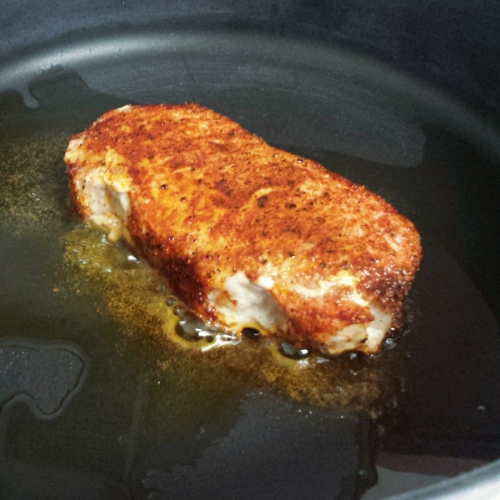 Here’s my pork chop, sizzling away in some olive oil. Now, this would be a lot truer to form if I used to a NON non-stick pan, but I didn’t have one available. Why do you try to use a pan that will cause the meat to stick? Because you WANT it to stick to the pan. The stuff left over in the pan is called a fond, and it’s jam-packed with flavor.

When making a pan sauce, you typically produce the fond, then you deglaze the pan with vinegar or stock (remove the fond from the pan and emulsify it into your liquid), reduce it, and then finish with butter (monter au beurre). That’s the gist, right? So keep that in mind as we go over the next few photos. 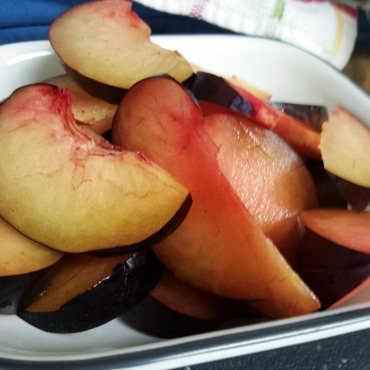 You can do this ahead of time. I did, actually. But then I decided to confuse the hell out of you and only post it after I got the whole pork process out of the way. But it doesn’t take long, so you should be able to do this step as the pork is searing.

Once the pork is seared on both sides, it’s time to put it on a plate and let it rest. Then, add the plums to the pan. Basically, you’re adding the fruit to the fond as well as any remaining oil in the pan, which has now been flavored with the pork drippings. 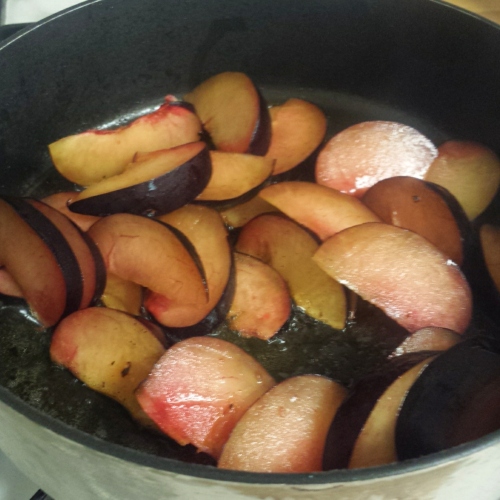 In a very short amount of time, the plums will begin to break down (and suck up that porky goodness).

See how quick that was?

And then BAM! Look at that color! At this point, I added about a tablespoon of balsamic vinegar and tasted it. Too sour. So, I added brown sugar. A couple teaspoons, but it’s to taste.

Now, here’s the fun part. Add a couple tablespoons of butter, like so:

Once you add the butter, take the pan off the burner and shake it in one hand while simultaneously mixing the mixture with a spoon with the other. You only have a short amount of time to do this, which is why I rushed the photo. Doing this helps the butter emulsify into the mixture and you’re left with a beautifully colored sauce with a sheen and better mouthfeel: 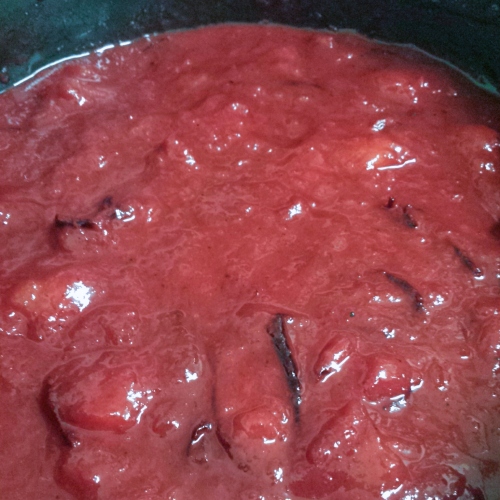 Now, the reason I reverse-seared the pork: making the gastrique while the pork is resting (and not while it’s baking) prevents me from messing with it and cutting into it too early. On the other hand, making the gastrique while the pork is baking would be fine if I could just, you know, exhibit any amount of self control and wait 5-10 minutes after the pork is done, but honestly, this stuff smells amazing and you’re going to want to eat it right away. But you do you.

I need to work on my plating. But that’s the gastrique. It was sweet, salty, and sour. Just freaking delicious. You can mix and match various things here as well. A gastrique like this would do well with a splash of red wine or a different kind of vinegar or even a couple of shakes of cayenne pepper. It’s up to you.

And the money shot. Enjoy!